I’ve spent a good part of the last two months traveling and attending writing-related conferences and conventions.  In truth, it began back in mid-August when I attended the Cape Cod Writers Conference and met Devon Ellington and Faith Dincolo.  Devon taught our year-long, novel-writing intensive, and Faith was a fellow student as well as, apparently, my long lost twin.

In September, I tagged along while Darin spoke at a mining investment conference near San Diego.  We drove up to Rancho Cucamonga (don’t you love the name!) to visit Faith and her husband Sandy.

At the end of September I went to the Vancouver Science Fiction Convention (VCon) in Surrey and took part in a great writing workshop.  Two weeks later, it was the Surrey Writers Conference and then I headed to Ottawa to visit my parents before flying over to Toronto for the World Fantasy Convention.  I just missed Hurricane Sandy, but witnessed some of the aftermath – this picture is taken in St. James Cemetery.  Several large trees went down and, sadly, crushed some nineteenth-century headstones.

St. James Cemetery is one of the settings in my novel-in-progress.  While I attended Ryerson University I lived in the apartment building visible in the background of the picture. It’s been twenty-five years since I visited the neighbourhood. 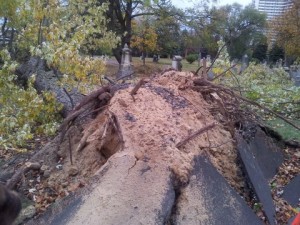 I learned a lot during my recent travels and enjoyed meeting fellow writers. Now I need to spend some time catching up.

I’ve been tagged in two blog posts.  One asks me to list “7 Things about me” and the other is a “The Next Big Thing” list of questions about my work-in-progress.

While I’m happy to be home for awhile, I am looking ahead to 2013.  There are so many interesting sounding conventions and writers conferences.  I’d love to hear your recommendations.